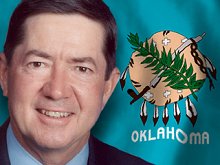 Now let’s get this straight.

The State of Oklahoma has sued the poultry industry led by Tyson Foods in federal court to stop the application of poultry litter as fertilizer in the Illinois River watershed.

Then when Oklahoma Attorney General Drew Edmondson suggests poultry litter pollution could be the cause of last summer’s  unsolved E coli 0111 outbreak in Locust Grove, which is well outside the IR watershed, Tyson’s pr operation charges the AG with trying to influence potential jurors in the IR case.

And now after a bunch of private water wells in the Locust Grove area have been found to be free of the E. coli 0111 strain responsible for the outbreak that killed a local man and sickened 313. but are  contaminated with other forms of the E coli bacteria, Tyson attorneys have asked a federal magistrate to let them depose the AG about the outbreak.

The AG does not plan on cooperating with the chicken lawyers. "They are talking about a half day or a full day out of my schedule for a fishing expedition," Edmondson told the Arkansas Democrat Gazette.  "I don’t intend to be a witness. It’s gamesmanship, and I don’t intend to play."

Chicken manure in the water is not a new story in Oklahoma.  Tyson’s and five other poultry companies agreed to pay a $7.3 million settlement fee to the City of Tulsa, to settle charges that the use of chicken waste as fertilizer had created phosphorus pollution in city’s water.

For more on the latest moves in the Illinois River case, go here.